Have you read my previous posts in the QR code series? By now, we’ve covered the planning, creation of mobile landing pages and making of a QR code itself. Last time I promised that we’ll look more into what you have to be careful of when actually placing the QR code. Where does it make sense to put it? Avoid the ridiculous QR code placement mistakes that we all see everyday by following the tips below.

1. Don’t Place Your QR Code In Areas With No Internet Access

This one should be a natural, but I still see this trivial QR code placement mistake happen way too often. Budding marketers get way too excited about the potential of QR codes. But they often forget to consider the context of their QR code ad placement. You really don’t want to place your QR code on your prime ad on the subway. Well, except if you are in South Korea. 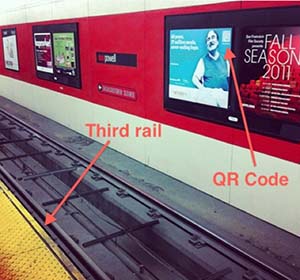 2. Position Your QR Code So That People Can See & Scan It 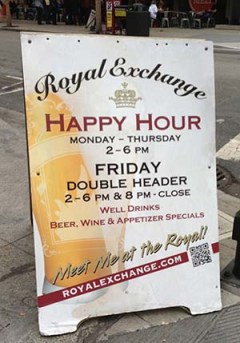 This is probably one of the most annoying and often seen QR code mistakes. If you are about to use a QR code, make sure that your ad is going to be placed in a position where it makes sense for people to scan it.

Let’s take a look at the QR code placement on the right: if your ad is going to be posted close to the floor like this one, then make sure that your QR code is as high up in the ad as possible (if it makes sense to put it there in the first place). If you make your ad practically unscannable, you are only wasting your expensive ad space.

3. Not Every Ad Was Made For A QR Code

I am excited to see the uptick in QR code usage, but I don’t want this technology to get a bad reputation. Whenever you feel like using a QR code for your next ad double check that you are well equipped with everything you need to know about it.

Questions to ask yourself:

While QR codes can be extremely effective, they can also be annoying if they are not executed correctly. Make sure you are on the right side of the fence.

4. Never (Ever) Place A QR Code On A Webpage

It might seem like a great idea at first. Placing a QR code on your website and enabling your customers to get a special offer or some other information on their mobile phone. Well, it turns out, that it’s really weird and actually works only in very rare instances (for example, when you want people to save a map on their mobile phones).

Ok, but you really have a piece of information you would like people to have on their mobile devices? There are a few alternatives that will NOT turn out weird:

Last warning! Placing your QR codes inappropriately can land you a spot on a website like this. You wouldn’t like your brand to be featured there, would you?

Also, we are almost at the end of the QR code series of posts. Next time I’ll cover how to structure the QR code advertisement itself, which is an immensely important part of every QR code marketing campaign. Subscribe to our email newsletter and get all our future marketing blog posts straight into your inbox!

Success! Now check your email to confirm your subscription.

Splitter is a marketing tool that helps you manage and contextually target your online and offline links. Improving your conversion rates has never been easier.